Prior to Christmas, I was given the opportunity to buy-in on some 2mmFS limited-run wagon etches.  They were of LNWR origin, but as I’m always on the lookout for rolling stock variety, I grabbed the chance to get some less common cattle vans.  In particular, the D26 Special Cattle van, not quite a horsebox, but something in which you could put your prized bull! 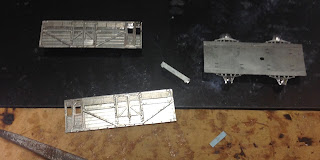 - Initial build, sides done.
While not an expert, my soldering skills have come a long way in the past 8 years.  Back then I wouldn’t even contemplate building a brass etch kit, but now I’m all in.  In this case it wasn’t brass, but nickel, but same concept.  To add to the difficulty, there were no instructions. After discussions with Sithlord, the build was quite simple, just imagine an IKEA flatpack, but instead of the Allen key, it a dab of solder and a hot iron. 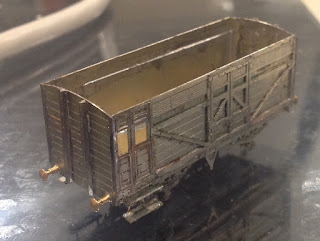 - Van 1
The side walls themselves consist of 3 layers, to get the detail.  The outer fret actually has locating holes in which to insert some brass top hat bearings to line up the layers.  I didn’t do this the first wagon I built, but did on the second, and it shows.  A surf of the interwebby found some other 2mm bloggers who were all building this van, and there were some handy hints.


If I had my own way in designing such a kit, I’d rather see the main body be one etch, with walls, ends and floor able to be folded-up.  And then the panel details added. But this is only minor.


Now for the finishing, firstly finding some wheels, appropriate decals and a coat of paint.
Posted by Neb from Downunder at 05:23